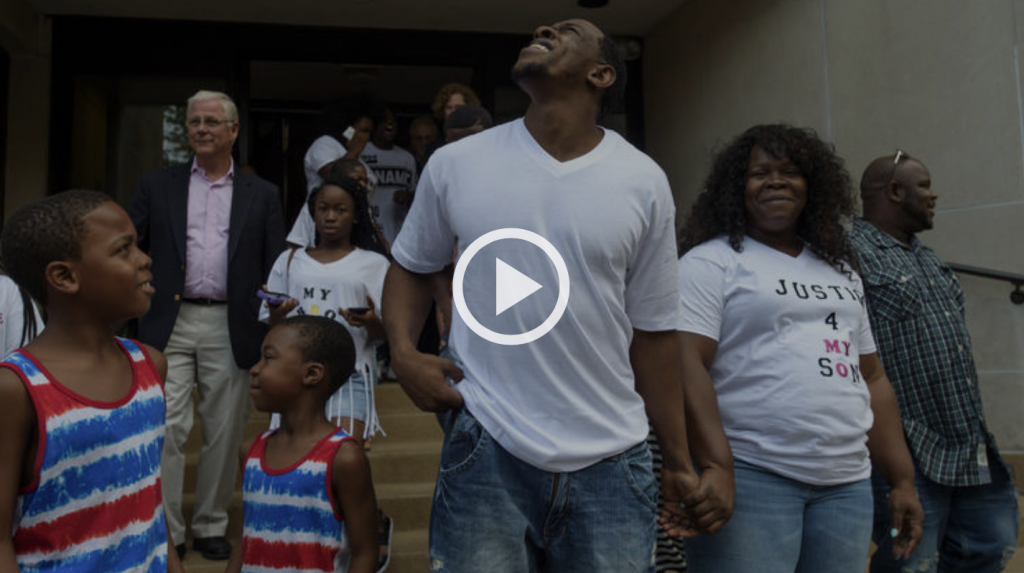 NEW HAVEN — In the same courtroom where a judge in 2007 sentenced him to 38 years in prison for a murder he said he did not commit, Bobby Johnson won his freedom Friday surrounded by the family members and lawyers who always believed he was innocent.

“I will enter a dismissal on the charges,” Superior Court Judge Patrick J. Clifford told a courtroom gallery crowded with Johnson’s supporters who erupted into applause at the end of the hearing.

“It’s a proud day for the criminal justice system in the state of Connecticut,” said Darcy McGraw, head of the Connecticut Innocence Project, which helped Johnson fight for exoneration. “An innocent man will go free.”

While holding his mother’s hand, Johnson, 25, stepped slowly into Friday’s heat and humidity toward a crowd of news reporters and onlookers gathered at the steps of the Church Street courthouse exit. He looked up into the overcast sky, shook his head and closed his eyes. Nine years in jail were now behind him.

“It feels excellent,” he said with a smile.

Later, at lawyer Kenneth Rosenthal’s office, Johnson admitted he was apprehensive about the future.

“I’m scared,” he said. “You know, me coming out now but when I went in I was a child. That’s going to be my biggest challenge. But I have a good support system,” he said nodding to the two dozen family members and friends who were there for him Friday.

He said he planned to use what he learned on the inside — to apply yourself and stay busy — to guide his new life on the outside. While in prison, Johnson said, he finished high school, his IQ jumped significantly, and he learned new skills that he hopes to put to good use. He said he also matured and learned how to be patient at times when he just wanted to scream.

One of the first things Bobby Johnson wants to do with his freedom? Be with his family.

“At the end of the day there, you still got to do the time so you either deal with how to do it or let the time do you,” he said. “It’s on you. If you apply yourself and learn, you gain strength and courage. If you sit there stressed, a lot of trouble comes your way.”

Johnson was just 16 when he was jailed for the Aug. 1, 2006 fatal shooting of 70-year-old Herbert Fields in New Haven’s Newhallville neighborhood in what police said was a street robbery.

Johnson confessed to the slaying and agreed to plead guilty in July 2007 in exchange for the 38-year sentence, a more lenient punishment than he would have received if he was convicted at trial.

But there was more to the story.

His co-defendant in the case, Kwame Wells-Jordan, who was 14 at the time of the murder, chose to fight his charges and was acquitted by a jury. The evidence and testimony brought forth at the trial by Wells-Jordan’s lawyer, Diane Polan, raised questions about how police handled the investigation, including whether detectives coerced confessions and other information from the two teens.

With the help of Rosenthal, a veteran New Haven lawyer, and the Innocence Project, a division of Connecticut’s Public Defender Services, Johnson continued his fight for exoneration.

Rosenthal argued that the detectives investigating Fields’ murder prided themselves on closing murder investigations quickly and said they had a “100 percent solvability rate” ahead of any other members of the department. He said there were “off-the-record breakdown” sessions in which Johnson and Wells-Jordan were told there was overwhelming forensic evidence against them and that they would face the death penalty.

Rosenthal said police neglected to investigate two other possible suspects, two men with long criminal records who fit the descriptions of the two men involved in Fields’ slaying. Rosenthal said a firearm and a palm print from one of those men found on Fields’ car linked the men to the murder.

But those arguments were not enough. After losing a bid for a new trial, Rosenthal appealed directly to Deputy Chief State’s Attorney Leonard Boyle to take a second look at police and court records in the case.

Boyle agreed and, after an investigation by the chief state’s attorney’s office showed the conviction “lacked integrity,” prosecutors moved to have the verdict set aside, leading to Friday’s hearing.

McGraw talked during Friday’s hearing about the extraordinary efforts of Rosenthal — who became emotional during the proceedings — saying Rosenthal “really threw himself,” into Johnson’s case.

“He has a reputation for doing that,” Judge Clifford replied.

The attorneys also lauded the work by prosecutors, including New Haven State’s Attorney Michael Dearington and the chief state’s attorney’s office in dealing with the admittedly uncomfortable task of re-examining a criminal investigation. Dearington said the Fields murder investigation is now being handled by the chief state’s attorney’s office’s cold case unit.

“The investigation of the death of Mr. Fields is ongoing,” Dearington told Clifford.

That was good news to Fields’ daughter, Susan Troxler. Troxler said in court Friday that as she learned about the inconsistencies in the investigation of her father’s murder, she became confused and worried that the real killer may never be caught.

And that’s a heavy burden to bear, she said, the idea of no justice for the father she loved so much, a man she described as a good provider who took his family on vacations and cooked amazing barbecue.

“My 70-year-old dad did not deserve to die in this way,” she said. She told Johnson, “I really hope the rest of your life is the best life you can have.”

Outside the courtroom, Troxler said she was happy for Johnson but remains troubled.

Troxler shared hugs with several members of Johnson’s family as they made their way out of the courthouse and down the street to Rosenthal’s State Street law office for a small celebration.

During the walk, Johnson looked with amazement at family members who had grown up and the babies who were born in the nine years since he was locked up. Friends were equally surprised by how much Johnson had grown as he walked down the street holding up his oversized jeans until a family member brought him a belt.

They laughed, explaining to Johnson that since it had been years since Johnson had worn regular clothes, no one knew what size pants to bring him Friday.

When people asked him what he wanted to eat, he said anything but prison food.

“No noodles. No noodles, ever. And no chips either. Too many chips in there,” he said.

Johnson said for now, he planned to live with a sister while he looked for a job and a place to live on his own. He said he planned to stay in contact with those who helped him gain his freedom and he hoped to help in any way, particularly with criminal cases involving young men.

He said immediately after his arrest, he had no one looking out for him.

When Johnson initially talked to the two detectives on the case, Clarence Willoughby and Michael Quinn, he said he denied any involvement. That interview was not recorded.

Rosenthal said the detectives made up their minds early that Johnson and Wells-Jordan were linked to the murder and did not investigate other pertinent evidence, including a possible link between Fields’ slaying and two other homicides that occurred at about the same time.

He said Johnson did not have a parent or guardian with him when he was questioned and that Willoughby threatened that if Johnson didn’t confess, he would never see his family again.

On Friday, Johnson said he still remembers that moment and the hours of brutal interrogation.

“It was so crazy,” Johnson said. “I didn’t even know how to respond. I didn’t even know my rights. They never told me. If I knew I had the option of walking out, but even then my options were limited. I did try to walk out one time and they stopped me and then there was the pressure, getting close in your face and spit flying everywhere.”

Johnson said he thought a law that went into effect in January 2014 requiring all police departments across the state to record interrogations of serious crimes was an important step taken by the state.

“I think my case shows how we need to protect our young and know these type of interrogations and stuff like that because the tactics that are being used are forceful and they harm; they’re destructive,” he said.

Willoughby and Quinn are no longer with the New Haven Police Department. They both retired in 2008, city spokesman Laurence Grotheer said. Pension information was not available Friday.

Willoughby was acquitted in 2009 of larceny and forgery charges, according to an April 13, 2009 article in the New Haven Advocate. He had been accused of stealing money from an informant fund and forging documents.

Another Man Framed For Murder To Go Free

Bobby Johnson was released from prison on Friday after nine[...]